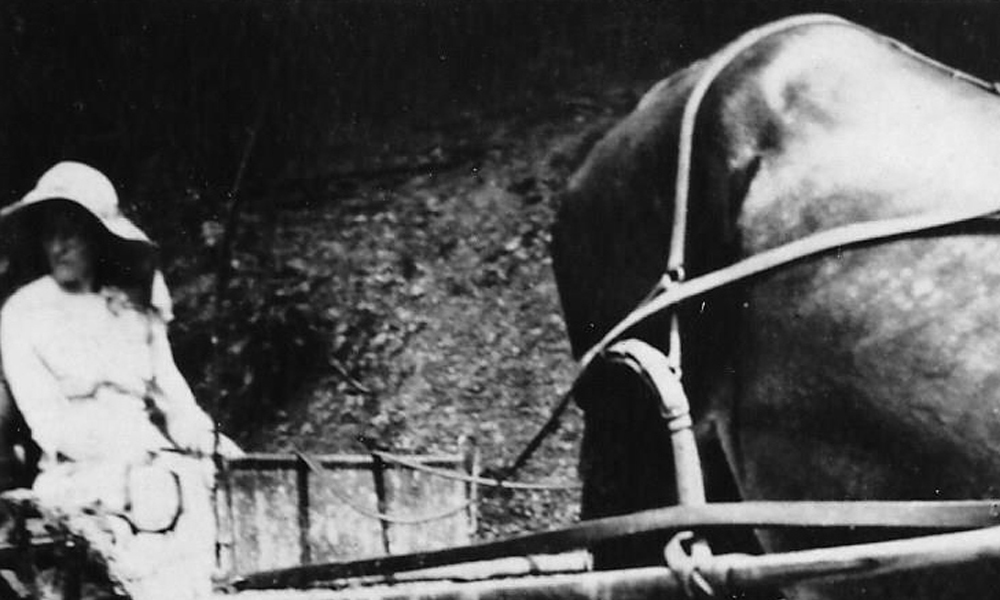 Alice Lloyd driving into KY in 1915

Boone Tavern on the campus of Berea College

Boy on the bridge at Asheville Farm School, which evolved into Warren Wilson College

The WCC evolved slowly as individual colleges became aware of one another. The Educational Foundation of America (EFA) provided a two-year grant to the Berea College work program to strengthen and share the model. The funds allowed Berea’s Dean of Labor Bill Ramsay to visit other work schools and begin to make connections as group.

Dean Ramsay began visiting congressional representatives in Washington, DC in an effort to resolve an issue for Berea College regarding student earnings. Ramsay was often asked, “What is a work college?” He realized that many people had never heard of a Work College before and were unfamiliar with the model – which caused him some concern.

Dean Ramsay began full-time work on a definition for what a work college was - when the notion of legislation for the “work colleges” took hold. William (Buddy) Blakey was retained as an advisor, a former U.S. Senate staff member and advisor to Blackburn College.

Work Colleges legislation was drafted by Bill Ramsay, with Buddy Blakey, Harold McCullough and Omer Waddles (staff member for Congressman Perkins) along with input from each of the five schools identified as Work Colleges: Alice Lloyd College, Pippa Passes, KY; Berea College, Berea, KY; Blackburn College, Carlinville, IL; College of the Ozarks, Point Lookout, MO; and Warren Wilson College, Asheville, NC. The provision defined Work Colleges in an amendment to the reauthorization of the 1965 Higher Education Act (HEA). As defined, the legislation is to recognize, encourage and support comprehensive work-learning programs at colleges which promote and build work/service practices into their education programs and part of a financial plan which decreases reliance on grants and loans.

The provision was enacted with the 1992 reauthorization of the Higher Education Act, signed into law on July 23, 1992 to formally recognize and establish a Work Colleges program within the U.S. Department of Education.

Federal funding of the work colleges was first established. Although authorization for an appropriation was included in the HEA statute, funding was not allocated because the Federal Regulations (the guidelines for operating a work college program) were not completed. The Federal Regulations, based on the statute, were written in concert with the U.S. Department of Education along with input from the five colleges

The final federal regulations were published by the Department of Education in the December 1, 1994 Federal Register, governing the College Federal Work-Study Programs and the Work Colleges Program, in particular.

Sterling College was federally recognized by the U.S. Department of Education as a work college and joined the Work Colleges Consortium.

The Lumina Foundation provided the WCC with a rant to conduct a three-year national research project on the Work Colleges.

The WCC participated in the National Survey of Student Engagement (NSSE).

Ecclesia College was federally recognized by the U.S. Department of Education as a work college and joined the WCC.

The first full-time Executive Director was hired along with a part-time administrative assistant.

The WCC participated in the NSSE survey funded by the Lumina Foundation. The seven work colleges participated as a group.

The first By-Laws were written for the Consortium and approved by the Presidents Council. A reporting structure was established and a Work Directors Council put in place.

The WCC participated in “negotiated rule making” for the Department of Education to add additional language to the statute. “Service” was added to the previous phrase of “work-learning” thereby changing the legislation to read “work-learning-service.” There is a specific definition for service which encompasses service to both the external community and importantly the campus community.

A formula for the distribution of the federal funding was developed and adopted by the Work Colleges in 2010.

The WCC began annual meetings with the Department of Education.

The WCC introduced a new website and work plan. The Research Work Group was formed, the first of several collaborative WCC work groups.

Working with the Research Group and ACT, the WCC conducted a survey of alumni across the seven work colleges between 1993 and 2007. Data was incorporated into a booklet, “An Education that Works.”

Tax bill H.R.5244 on behalf of the Work Colleges was introduced on May 6, 2010. The Bill sponsored by Danny K. Davis (IL) with co-sponsors John Yarmuth (KY), Peter Roskam (IL) and Geoff Davis (KY).

Berea College was formally recognized as the “fiscal agent” for the WCC and a Fiscal Agency Agreement was written. The Consortium is not recognized as a non-profit or legal entity but as a group of colleges that share a mandatory work requirement for all resident students and work-learning-service as the core of their educational programs.

The first round of WCC Faculty/Staff grants was awarded.

The work colleges’ tax provision passed the House on December 17 as part of Congressman Smith’s (MO) initiative, H.R. 3409, the Tax Relief for Working Students Act. It was then passed by the Senate on December 18, 2015 and signed into law.

April 4, 2016 Bethany Global University was approved by the U.S. Department of Education as a Work College and joined the Consortium in July 2018.

March 20, 2017 Paul Quinn College was approved by the U.S. Department of Education as a Work College and joined the Consortium in January 2018.

May 26, 2021 Kuyper College was approved by the U.S. Department of Education as a Work College and joined the Consortium in July 2021.